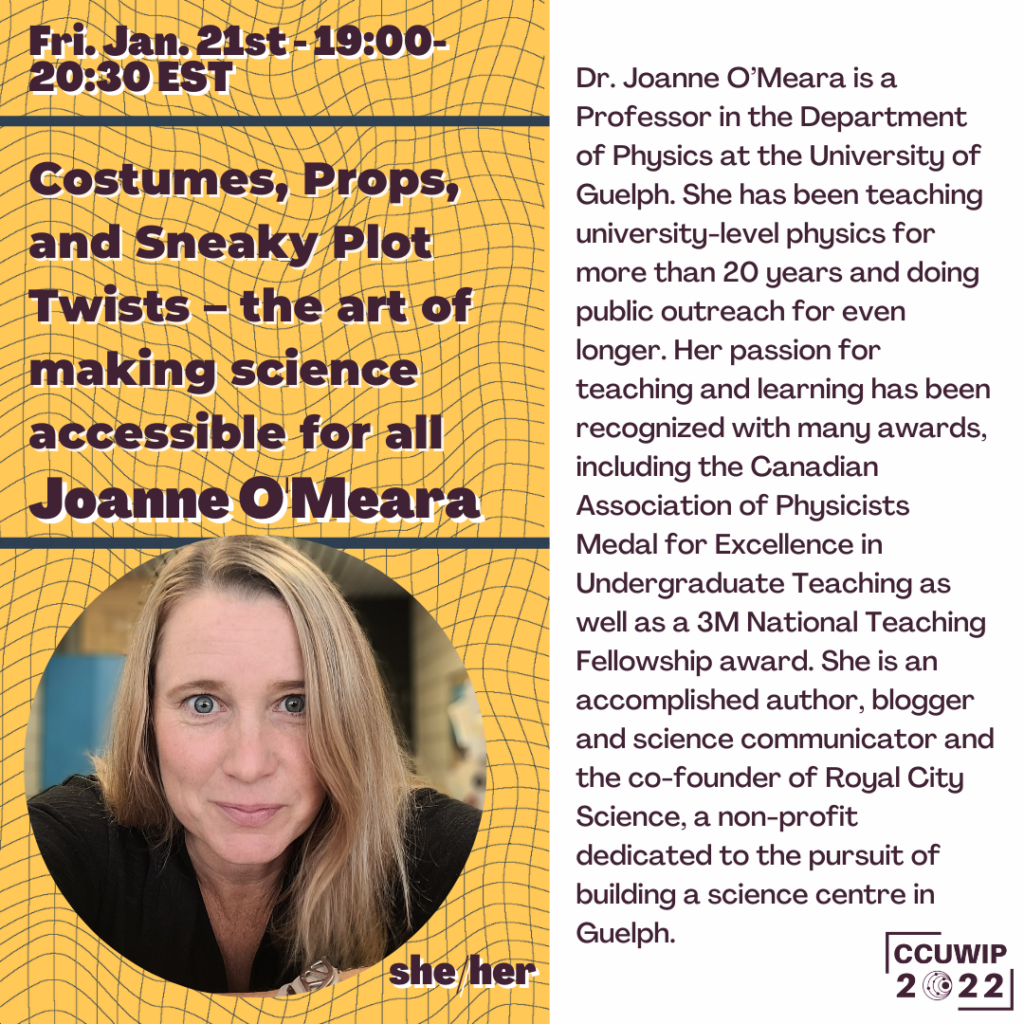 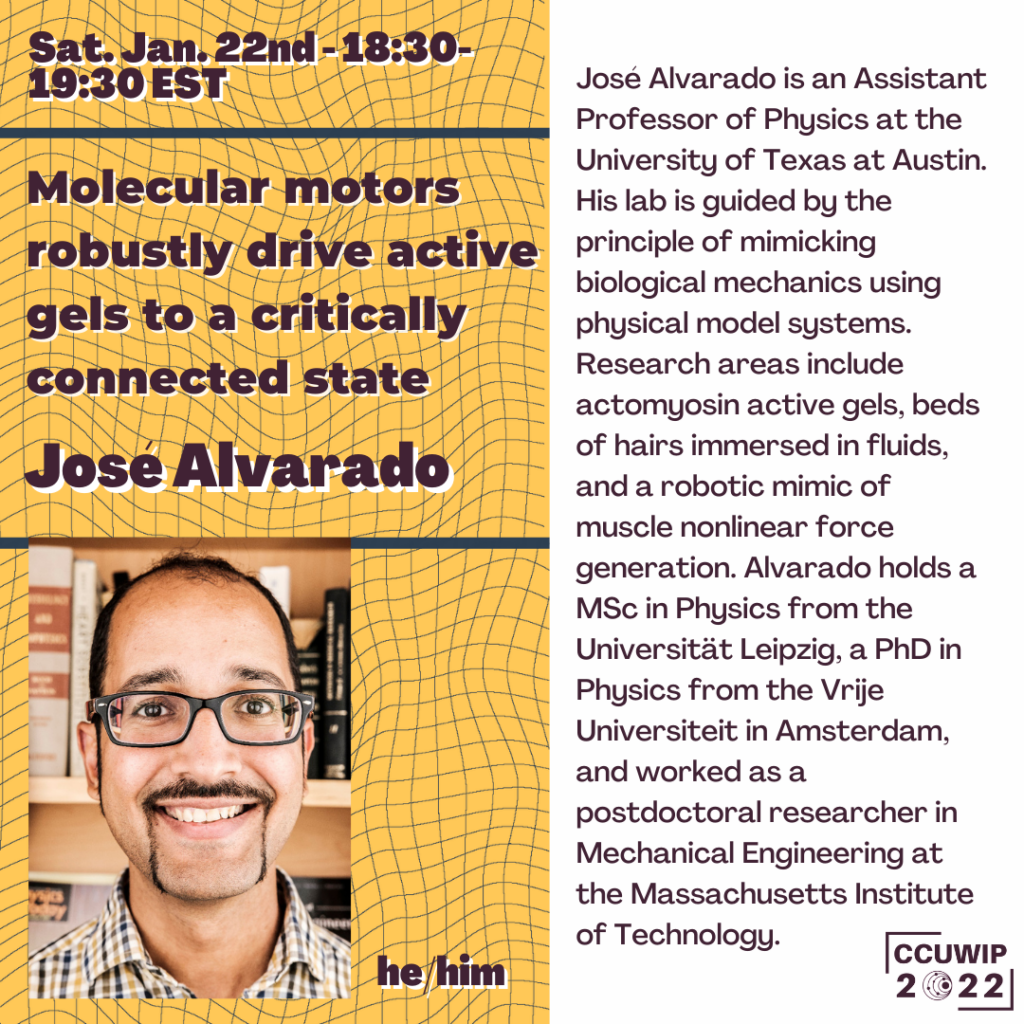 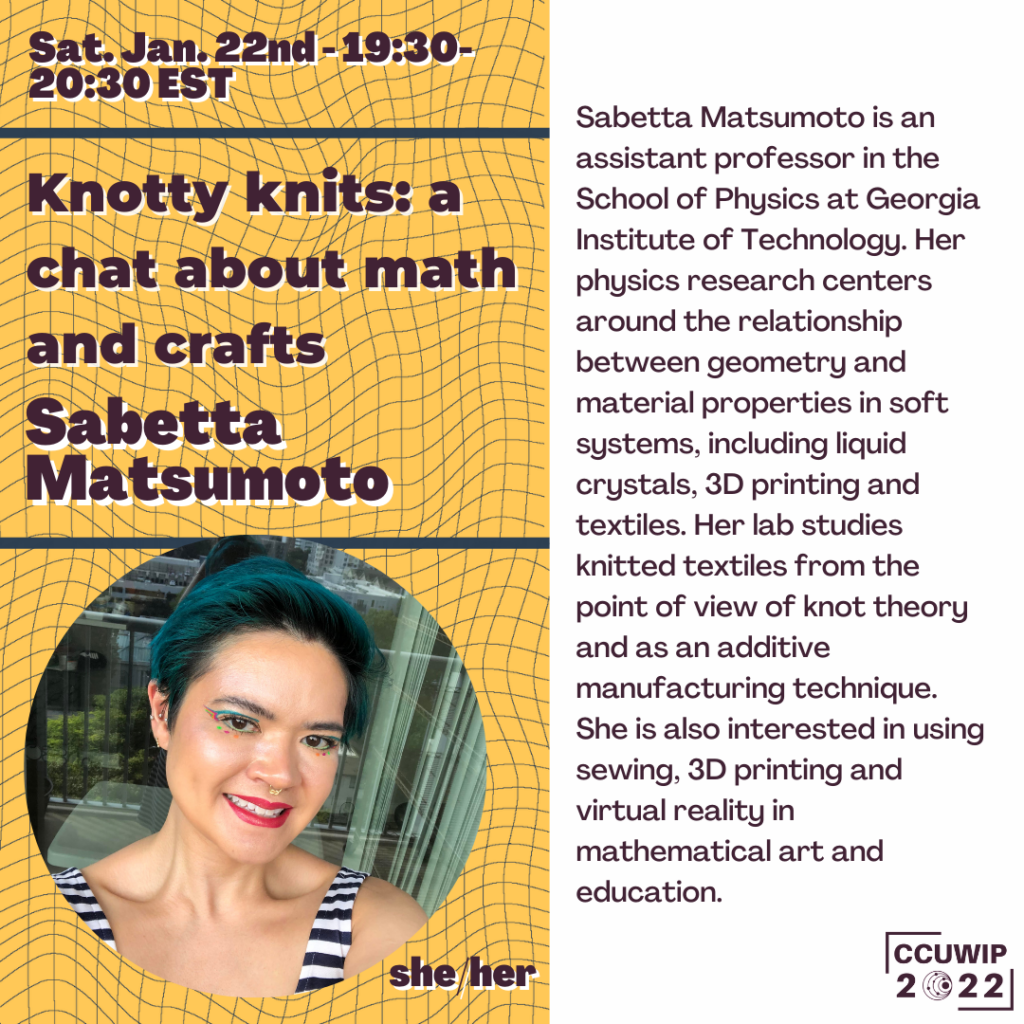 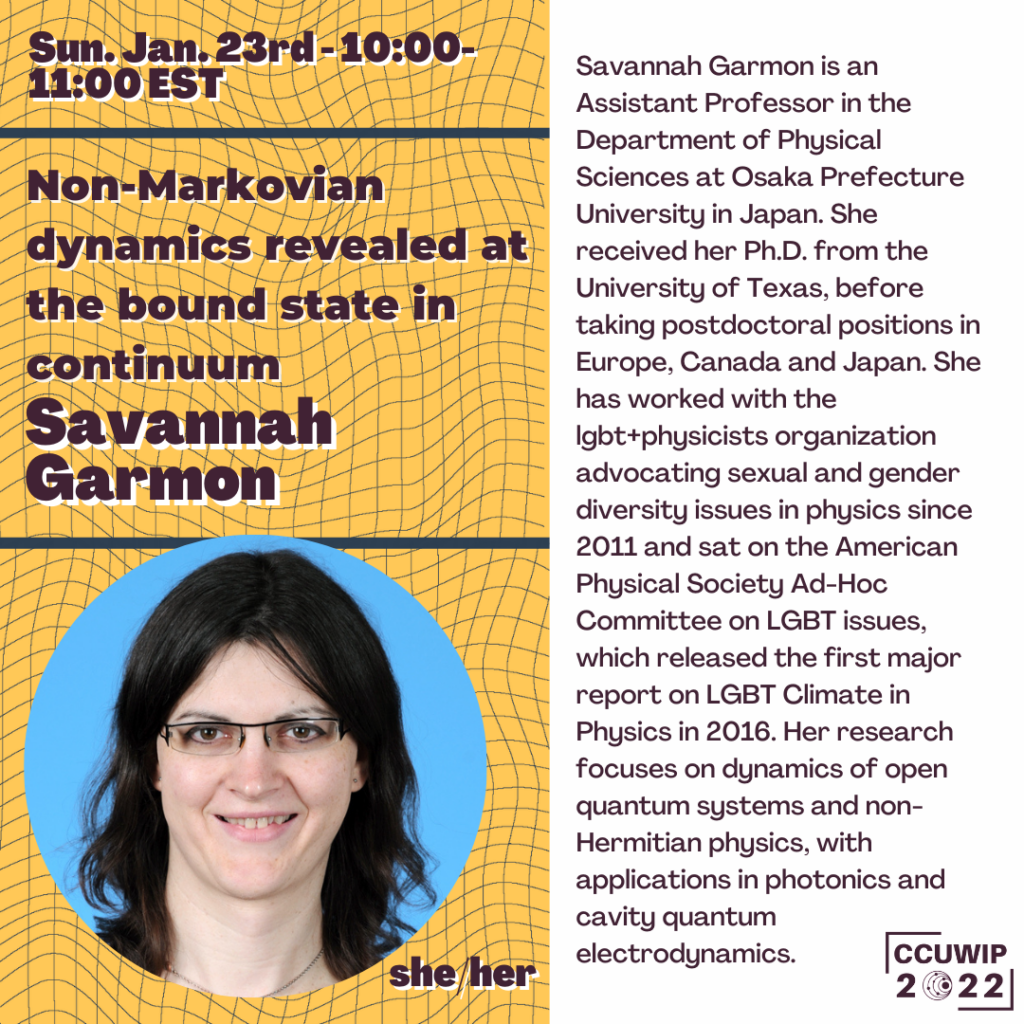 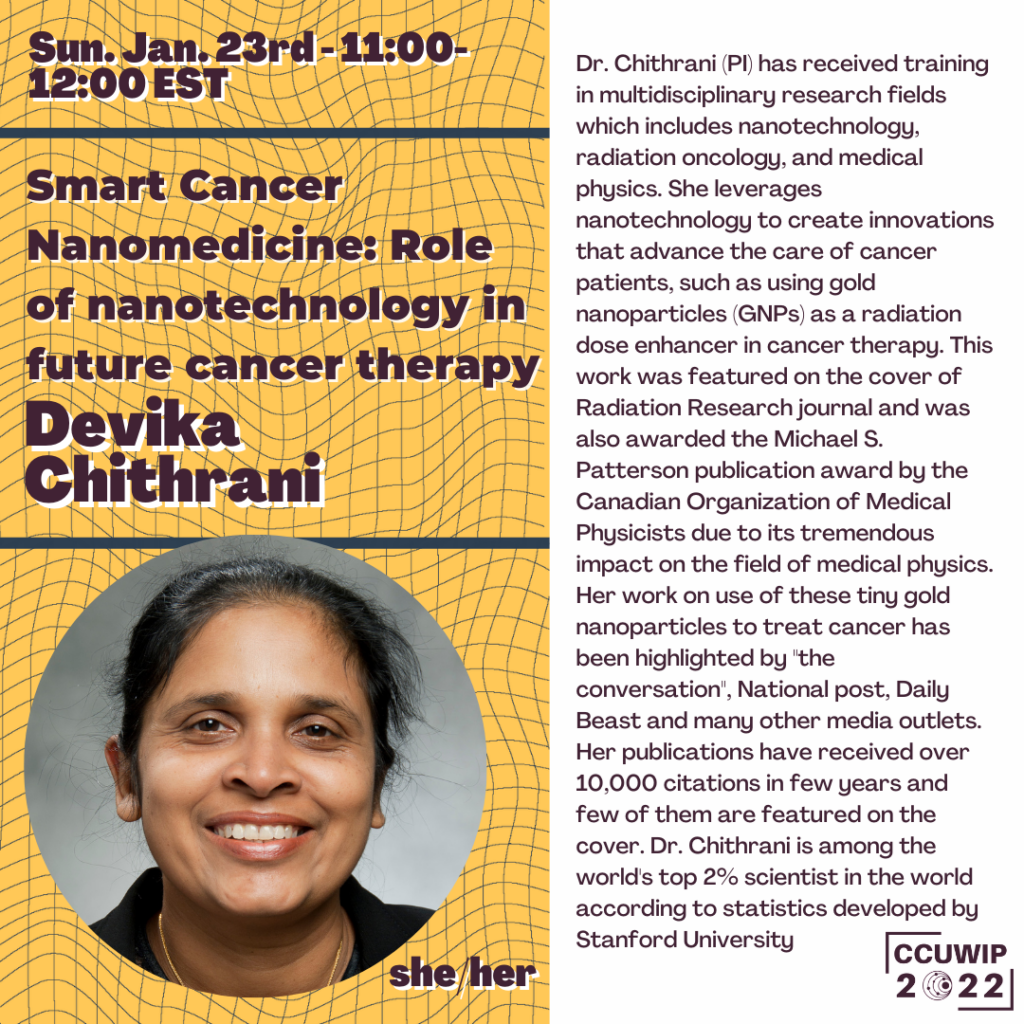 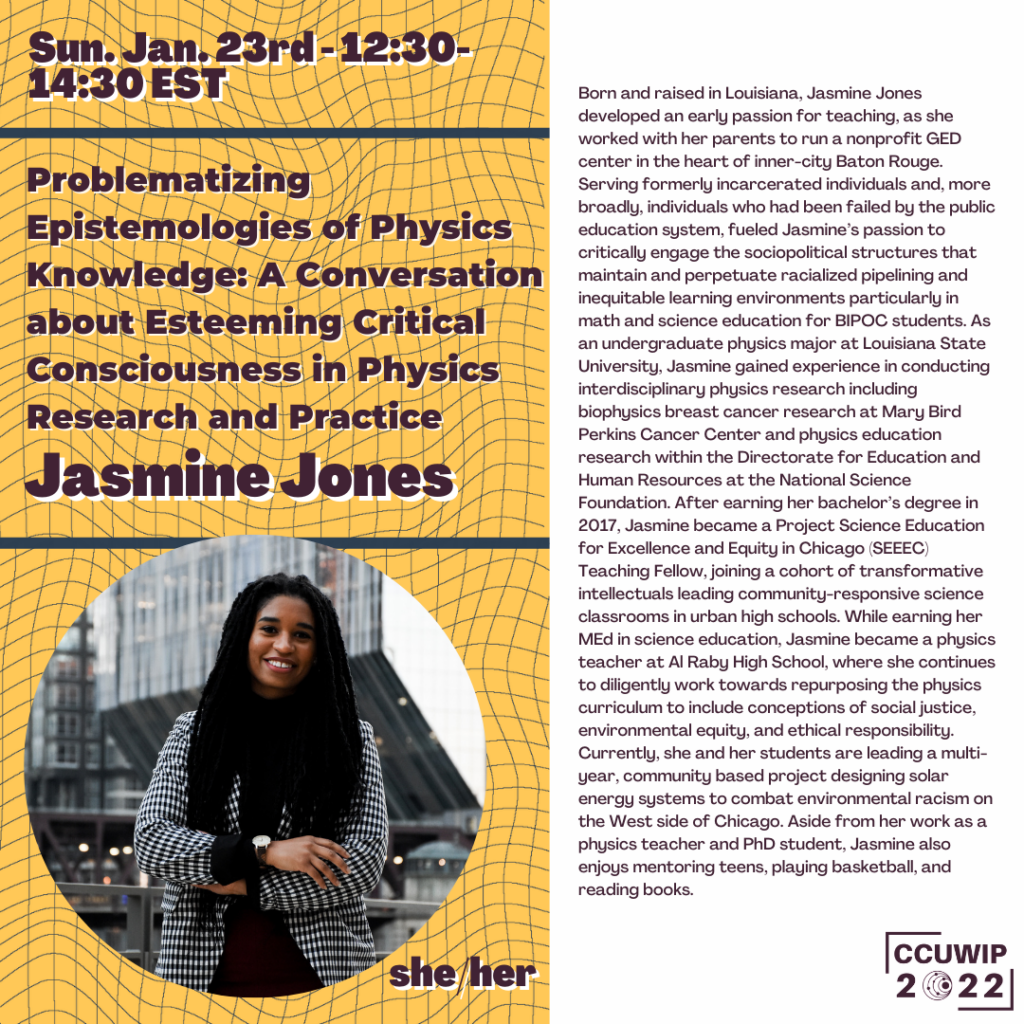 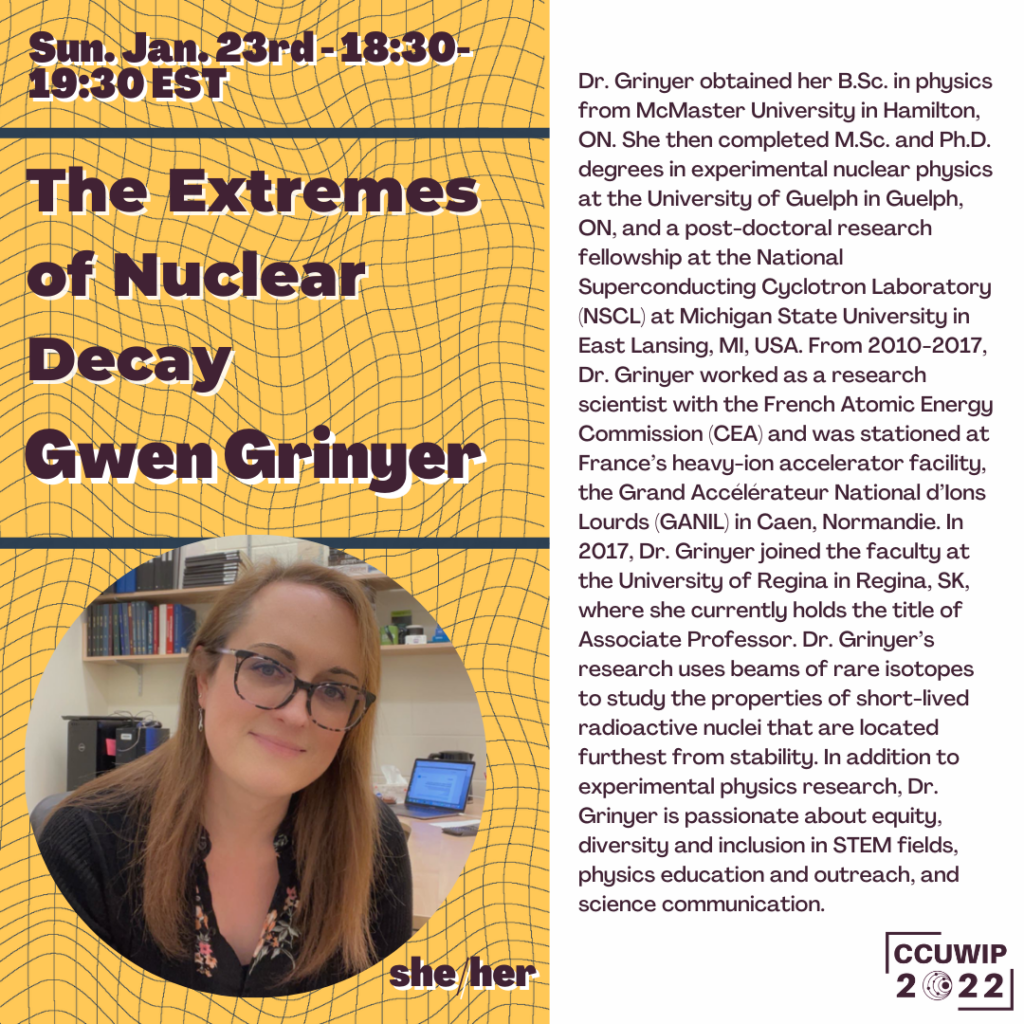 Dr. Joanne O’Meara is a Professor in the Department of Physics at the University of Guelph. She has been teaching university-level physics for more than 20 years and doing public outreach for even longer. Her passion for teaching and learning has been recognized with many awards, including the Canadian Association of Physicists Medal for Excellence in Undergraduate Teaching as well as a 3M National Teaching Fellowship award. She is an accomplished author, blogger and science communicator and the co-founder of Royal City Science, a non-profit dedicated to the pursuit of building a science centre in Guelph.

José Alvarado is an Assistant Professor of Physics at the University of Texas at Austin. His lab is guided by the principle of mimicking biological mechanics using physical model systems. Research areas include actomyosin active gels, beds of hairs immersed in fluids, and a robotic mimic of muscle nonlinear force generation. Alvarado holds a MSc in Physics from the Universität Leipzig, a PhD in Physics from the Vrije Universiteit in Amsterdam, and worked as a postdoctoral researcher in Mechanical Engineering at the Massachusetts Institute of Technology.

Sabetta Matsumoto is an assistant professor in the School of Physics at Georgia Institue of Technology. Her physics research centers around the relationship between geometry and material properties in soft systems, including liquid crystals, 3D printing and textiles. Her lab studies knitted textiles from the point of view of knot theory and as an additive manufacturing technique. She is also interested in using sewing, 3D printing and virtual reality in mathematical art and education.

Savannah Garmon is an Assistant Professor in the Department of Physical Sciences at Osaka Prefecture University in Japan.  She received her Ph.D. from the University of Texas, before taking postdoctoral positions in Europe, Canada and Japan.  She has worked with the lgbt+physicists organization advocating sexual and gender diversity issues in physics since 2011 and sat on the American Physical Society Ad-Hoc Committee on LGBT issues, which released the first major report on LGBT Climate in Physics in 2016.  Her research focuses on dynamics of open quantum systems and non-Hermitian physics, with applications in photonics and cavity quantum electrodynamics.

Dr. Chithrani (PI) has received training in multidisciplinary research fields which includes nanotechnology, radiation oncology, and medical physics. She leverages nanotechnology to create innovations that advance the care of cancer patients, such as using gold nanoparticles (GNPs) as a radiation dose enhancer in cancer therapy. This work was featured on the cover of Radiation Research journal and was also awarded the Michael S. Patterson publication award by the Canadian Organization of Medical Physicists due to its tremendous impact on the field of medical physics. Her work on use of these tiny gold nanoparticles to treat cancer has been highlighted by “the conversation”, National post, Daily Beast and many other media outlets. Her publications have received over 10,000 citations in few years and few of them are featured on the cover. Dr. Chithrani is among the world’s top 2% scientist in the  world  according to statistics developed by Stanford University.

Born and raised in Louisiana, Jasmine Jones developed an early passion for teaching, as she worked with her parents to run a nonprofit GED center in the heart of inner-city Baton Rouge. Serving formerly incarcerated individuals and, more broadly, individuals who had been failed by the public education system, fueled Jasmine’s passion to

critically engage the sociopolitical structures that maintain and perpetuate racialized pipelining and inequitable learning environments particularly in math and science education for BIPOC students. As an undergraduate physics major at Louisiana State University, Jasmine gained experience in conducting interdisciplinary physics research including biophysics breast cancer research at Mary Bird Perkins Cancer Center and physics education research within the Directorate for Education and Human Resources at the National Science Foundation. After earning her bachelor’s degree in 2017, Jasmine became a Project Science Education for Excellence and Equity in Chicago (SEEEC) Teaching Fellow, joining a cohort of transformative intellectuals leading community-responsive science classrooms in urban high schools. While earning her MEd in science education, Jasmine became a physics teacher at Al Raby High School, where she continues to diligently work towards repurposing the physics curriculum to include conceptions of social justice, environmental equity, and ethical responsibility. Currently, she and her students are leading a multi-year, community based project designing solar energy systems to combat environmental racism on the West side of Chicago. Aside from her work as a physics teacher and PhD student, Jasmine also enjoys mentoring teens, playing basketball, and reading books.

Dr. Grinyer obtained her B.Sc. in physics from McMaster University in Hamilton, ON.  She then completed M.Sc. and Ph.D. degrees in experimental nuclear physics at the University of Guelph in Guelph, ON, and a post-doctoral research fellowship at the National Superconducting Cyclotron Laboratory (NSCL) at Michigan State University in East Lansing, MI, USA.  From 2010-2017, Dr. Grinyer worked as a research scientist with the French Atomic Energy Commission (CEA) and was stationed at France’s heavy-ion accelerator facility, the Grand Accélérateur National d’Ions Lourds (GANIL) in Caen, Normandie.  In 2017, Dr. Grinyer joined the faculty at the University of Regina in Regina, SK, where she currently holds the title of Associate Professor.

Dr. Grinyer’s research uses beams of rare isotopes to study the properties of short-lived radioactive nuclei that are located furthest from stability.  The structure of these “exotic” nuclei are essential for understanding how the nuclear force evolves towards the extremes of matter and for describing the observed abundances of stable nuclei throughout the universe that are produced in explosive astrophysical scenarios.  This research spans a broad range of topics including ultra-high precision measurements to test the Standard Model description of electroweak interactions, high-resolution gamma-ray and charged particle spectroscopy of in-beam nuclear reactions and radioactive decays, and designing state-of-the-art instrumentation to be able to access the most exotic isotopes whose production rates are at the limits of feasibility.  Dr. Grinyer’s research is carried out TRIUMF and at other rare isotope production and accelerator facilities around the world.

In addition to experimental physics research, Dr. Grinyer is passionate about equity, diversity and inclusion in STEM fields, physics education and outreach, and science communication.