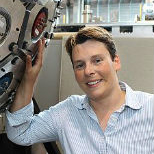 Iris Dillman is a nuclear astrophysicist. She obtained her PhD in astrophysics at University of Basel, Switzerland in 2006. In 2013, she joined TRIUMF, Canada’s national particle accelerator centre, as a research scientist in charge of the beta delayed neutron program. In 2015, she became an Adjunct Professor at the Department of Physics and Astronomy at the University of Victoria and the Scientific Coordinator of the NSERC CREATE program, IsoSiM. She mainly specializes in experimental nuclear astrophysics and nuclear physics. Her research group developed the particle detector CsISiPHOS for the future storage ring CR and radiation-hard diamond detectors for the Super-FRS at FAIR. The group also works on the investigation of half-lives and beta-delayed neutron emission probabilities of very neutron-rich isotopes with the Spanish-German neutron detector BELEN and the neutron detector DESCANT from the University of Guelph.